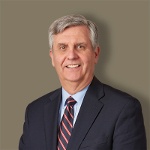 David Hollenbeck is an experienced practitioner and teacher in Workers’ Compensation Law who has devoted much time to representing a wide variety of governmental entities, including the City of Valparaiso, the Regional Development Authority (RDA) and the Northwest Indiana Regional Planning Commission.

Active in community affairs, Mr. Hollenbeck has served on the governing boards of the Boys and Girls Club, Chamber of Commerce and VU law and undergraduate alumni associations. At Immanuel Lutheran Church, he is a past President of the Church Council, a former school board member and Basketball coach. Since 1987, he has been a familiar figure behind the bench at VU football and basketball games where he operates time clocks and scoreboards.